How do you write a fairly complex Arduino project? Are there any best practices? …and for those who waited, the cloud cat feeder source code is now publicly available.

The challenges of programming an Arduino microcontroller

If you started your Arduino journey from a simple project - controlling LED with a simple switch, probably you faced different loop-based programming quirks… For example:

Before I started working on the ultimate cloud cat feeder, I was researching a little for Arduino best practices and design patterns, and I’ve found very little information. Here is my contribution, as well as explanation how the firmware of the cat feeder works on a high level.

If you haven’t seen it before, this is the ultimate cloud cat feeder:

All of it is controlled by single microcontroller, - ESP32 running Arduino (and a few more parts): 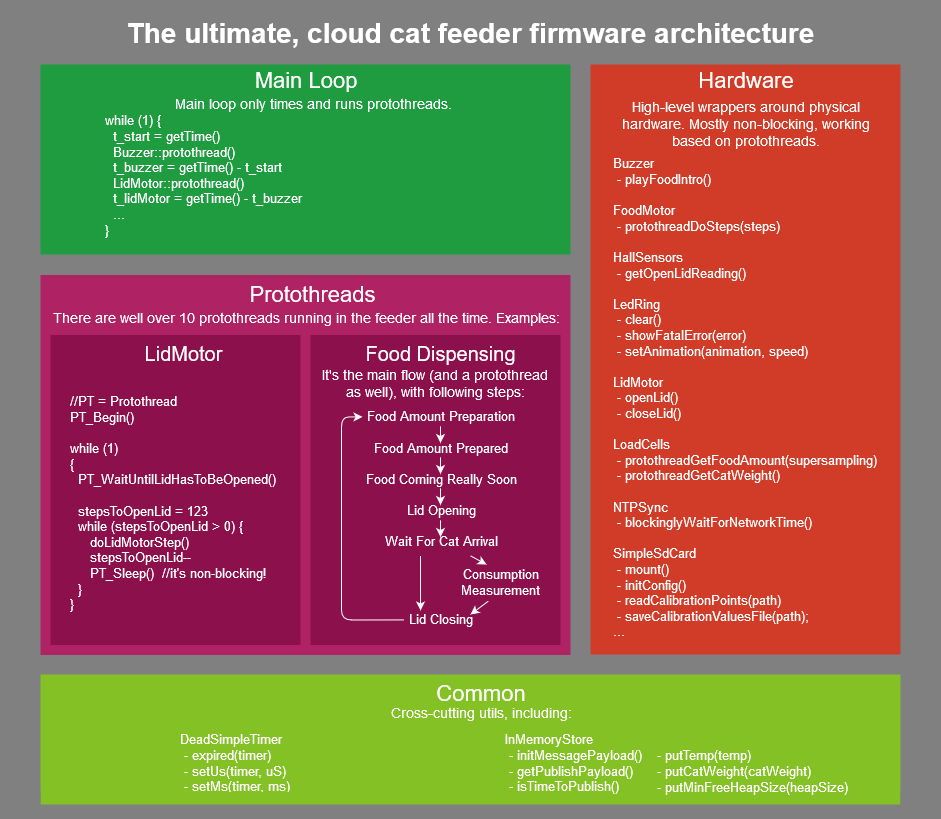 High-level diagram of the ultimate, cloud cat feeder device
Edit it on Draw.io

Protothreads, developed by Adam Dunkels are beautiful way of achieving multi-thread-like-ish environment with a single thread. Quoting his website: “Protothreads are extremely lightweight stackless threads designed for severely memory constrained systems (…)”. Because of that, the cat feeder main loop just runs (almost non-blocking) protothreads and measures theirs performance. Of course, some microcontroller operations are blocking, like digitalWrite, however no Arduino delay function should be used in the main execution path. Instead, use expiring timers and give away the computing power from waiting protothread. Example - using PT_WAIT_UNTIL instead of delay when playing a note

Although low-level hardware interaction can be verbose in code, usually that interaction is well defined and easy to abstract. Consider - for example - LidMotor. All we need from that physical component is to open and close the food lid. The reality is much more complicated: first, I need to check the lid position (to not close the lid, if it’s already closed) and for that I need to read a Hall sensor. Once position of the lid is established, the stepper motor has to start making steps, sleeping certain duration in between the steps. This has to be repeated until the second Hall sensor is triggered. After that, I need to open the lid a tiny bit more, so the lid is fully opened/closed. After this operation, I want to store how many steps were done in total, so I can spot any issues before they will impact the user (my cat!). Abstraction here is powerful: LidMotor::openLid(). No more details are needed to use this method.

Additionally, having hardware abstraction will allow you to write unit tests, if you would ever want to.

3. Limit the number of common utils, but do use them

I’ve found that I need just 3 utils used almost by every class: logging, timer and InMemoryStore:

Cat feeder and AWS cloud interaction
Edit it on Draw.io

In one of the earlier versions of the cat feeder there was a problem that it was stopping working once every week or two, without an apparent reason. Having all the metrics I have, the problem was easy to spot. The number of free heap size was “casually” going down to 0 bytes. Why it was going down to 0? On another graph I spotted that the free heap size drop was happening whenever the “AWS IoT reconnection flag” was up. Conclusion: the library I was using to connect to the AWS IoT had a memory leak! Three hours later, I swapped out the library for another one, fixing the issue. I can’t even imagine how long it would take me to figure out the problem without the metrics.

Don’t get me wrong, the cloud cat feeder design and code is NOT perfect. For instance, here are some things I would improve:

I’m pretty happy that the code is running now (almost) flawlessly for a longer period of time (3+ months). The design approach described here turned out to work great for me, yielding minimum amount of bugs. I’m super happy I went into protothreads path - some components were dead simple to write.

You can find more details on the cat feeder (building progress, features and technical details) here - all posts with cat-feeder tag.

Please note: the views I express are mine alone and they do not necessarily reflect the views of Amazon.com.

How do you write a fairly complex Arduino project? Are there any best practices? …and for those who waited, the cloud cat feeder source code is now publicly available.

Open sourcing the PCB of the ultimate cloud cat feeder

Dirty cheap PCB will make your life MUCH easier.

Around 500 MB of 3D models in ~50 STL files, plus Fusion 360 archive made available under Open Source license.

Over 16k upvotes in around 24h for 18 months of work on a side project - the ultimate cat feeder is pretty neat and the cat is happy, too

The ultimate cat feeder is done. Watch the demo and see why so many people like it!

I wasted 3 minutes every day on giving my cat food... so I spent 22+ hours designing an automatic cat feeder!

Watch taking the art of over-engineering to a next level… on a cat feeder :)

How to estimate host fleet size? Why keeping CPU at 30% might NOT be waste of money?

What does maximum-connections, CPU autoscaling, money and distributed systems have in common? Find out.

How do you know the right maximum connections?

How do you know the right maxThreads (Tomcat/Java) or maxConnections (IIS/.NET) for your application? What is it? Why do I need to set that?

(Auto) scaling services by CPU? You are doing it wrong

Bob is a very successful guy. He is auto scaling his service by automatically adding hosts when the CPU increases, and he is removing them when CPU goes down. Dear Bob, there is a trap waiting for you around the corner.

What service metrics should be monitored?

Monitoring services is crucial, if you care about the application uptime. There are hundreds if not thousands parameters which you can (and should) monitor, related to CPU, network, hosts, application and so on. What are they? What are the non-obvious choices?